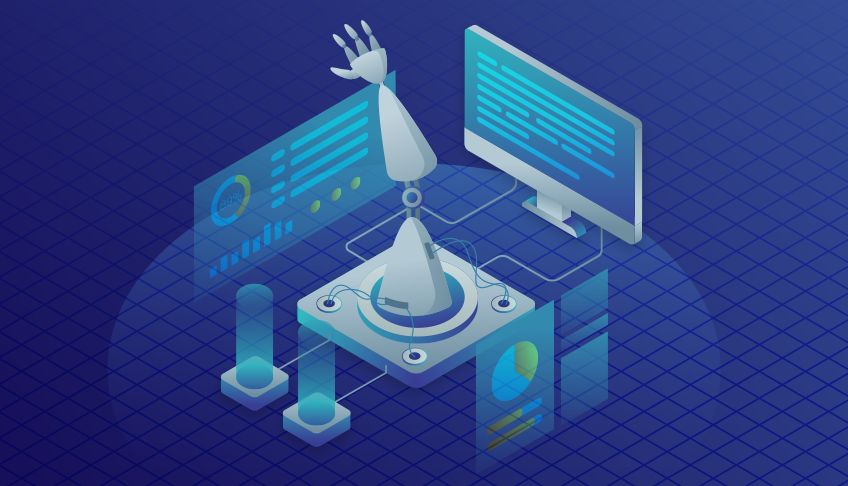 AI Is Here to Make Developers’ Jobs So Much Easier

The year is 2029. The Skynet artificial intelligence network has become self-aware. The machines have initiated a nuclear holocaust, and mankind’s only hope of survival rests in the hands of John Connor, who has rallied the few remaining humans into a resistance army that plans to overthrow the sentient AI overlords who now control Earth. Will they succeed?

OK, that’s not real life. That’s 100 percent the plot of Terminator, which, when it hit theaters in 1984, predicted a future for AI that is just a little different from what’s actually happened.

Artificial intelligence is far from a self-aware network of robot soldiers that threatens to overthrow humanity. In real life, AI is a helpful tool that remains fully within our control (for now???). It’s especially beneficial to knowledge workers, like software engineers, who can use it to automate certain tedious, repetitive tasks, freeing up their creative juices to flow toward tasks that require that creativity.

The reality of AI isn’t quite as flashy as what Hollywood imagined all those years ago, but it’s exciting nonetheless. AI can actually help us be our best selves. Read on to learn how.

How AI Is Changing the Future of Work… Right Now

It’s likely that in the coming years, AI will start to replace jobs and workers who perform repetitive or simple tasks. AI will likely even be able to take over simple problem-solving tasks, and do that type of work faster, more efficiently, and more accurately than humans can currently.

In industrial, customer service, manufacturing, and other sectors, AI systems are already being used to make decisions instead of people. You might even interact with AI systems already. You know when you visit the website for a business and ask simple questions in an instant messaging window? It’s possible there’s no human at the other end of that interaction — AI-powered chatbots are capable of answering simple questions and forwarding customer service queries.

There’s a lot of talk about how the rise of AI systems will affect workers and economies, as some jobs will be done by, essentially, robots instead of people. Some experts say this will negatively impact overall employment, while others say the automation of certain jobs will boost revenue for companies and allow them to spend more money on workers in other capacities. The truth is, we’re not sure yet and probably won’t be for a while exactly how AI systems becoming more prevalent will impact workers and economies.

What we do already know, though, is that AI can be a huge help to knowledge workers.

For Knowledge Workers, AI Is Like a Personal Assistant — But Better

Knowledge workers are the people whose jobs require them to use information, not necessarily manual labor. Lawyers, scientists, doctors, writers, and programmers are all considered knowledge workers, because their ability to do their jobs well depends less on performing certain types of labor, and more on being able to think critically, solve problems, and be creative.

For knowledge workers, the rise of AI can be seen as a huge positive — this technology can help knowledge workers in particular streamline their process and focus their efforts more efficiently.

Think about it this way. You’re a software developer, which is a job that takes tons of creativity, critical thinking, and problem solving to help you arrive at solutions to your clients’ business needs. But in between all the creative energy you have to pour into doing a great job as an engineer, you also have repetitive, tedious tasks to finish. Things like onboarding and training new employees, scheduling meetings, sending product updates, even analyzing source code — these are the manual tasks that can often be automated.

Imagine doing your job, but without all those tedious administrative tasks. And imagine knowing they’re all getting done, but with more efficiency and accuracy than if a human were doing them. It’s like having a personal assistant, but one that works faster and more accurately than a human could, and also doesn’t need training and won’t ever call in sick.

That’s the kind of magic AI offers for knowledge workers. With all that manual work off your plate, you can pour more time, resources, and energy into the kinds of tasks that actually require your talents, experience, and creativity. For knowledge workers, doing our jobs alongside AI technology is an exciting prospect. AI can augment our abilities in exciting ways that make us happier and smarter, but without replacing the creativity, insight, and problem solving abilities that we bring to the table.

How AI Is Changing Time Tracking and Management

At 7pace, you probably already know we have a particular interest in time management. Our 7pace Timetracker was created to be a tool developers could use to gain meaningful insights about their work and time management — not for managers to use to micromanage their employees.

And as the future of work gets closer and closer, 7pace Timetracker is changing right along with it. 7pace is beginning to implement AI systems as part of that time tracking software, and it’s only going to make it a more useful tool for developers.

Once it’s successfully implemented, AI technology will eliminate all (or nearly all) the manual effort that goes along with time tracking. In other words, developers who use 7pace Timetracker will still be able to take advantage of all the benefits that come from time tracking, like keeping historical data, analyzing time management, and controlling costs. The difference? They’ll be able to do all that without having to do the work of actually tracking their time. Plus, users will be able to accept tracked time, and then receive AI-driven estimates for upcoming tasks based on past work.

AI integrated with time tracking software will be the kind of tool that allows developers to level up in their careers. Enjoy all the benefits of having manual time tracking done, but without having to spend the time or the energy to do it. Instead, you get to spend that time and energy doing what you do best: Writing code and constantly becoming better, thanks to being able to work alongside AI.

When it Comes to Work, the Future Is Now

There’s still some uncertainty about exactly what it’s going to look like as AI becomes more and more prevalent in our lives and our jobs. What we do know is that it’s going to be nothing like in Terminator — AI is here to help us be better, not to cause a world-ending war. And for knowledge workers, AI will be the key to automating the parts of our jobs that we already wish we didn’t have to do. From administrative tasks to time tracking, AI is primed to take over, freeing up developers and other knowledge workers to be their best selves.