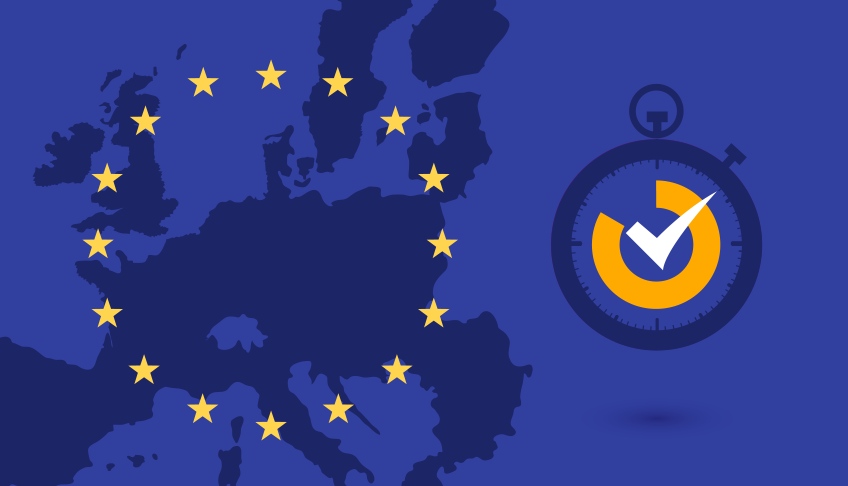 Recently, an EU court ruled that it should be mandatory for employers to accurately measure employee work hours and ensure that workers are receiving an allotted time off from the job.

This ruling has caused both some confusion and some outright consternation.

It’s not exactly the outcome that many employer groups expected (or wanted) from the quarrel.

But why is that? It seems that the practical applications of this ruling may be largely mischaracterized and misunderstood. While many employers are calling the so-called “punch-card requirement” a throwback to an outdated model of work, they seem to be overlooking the fact that their vision for implementing a time-tracking process and the benefits of doing so are, in fact, outdated.

The reality is that tracking time as a process has become largely more seamless than the old days of mechanical machines and paper time cards. Likewise, the science has shown that tracking time—and adhering to strict policies aimed at reducing overwork—benefit both employees and employers.

The Importance of Protecting Work

Let’s first call this ruling what it is: A win for workers.

The EU’s workplace directives already call for workers to enjoy at least 11 hours of uninterrupted time outside of work per day and at least one 24-hour uninterrupted period off per week. The current rules also call for rest breaks at least once every 6 hours.

These seem like reasonable expectations. Time tracking will ensure that they are met consistently.

In this new law, the EU has recognized the opportunity for worker’s rights to be supplanted by demands of employers—especially during stressful, high-volume, or high-stakes work periods. The move makes sense to create a backstop that protects against the erosion of worker’s time away from the job.

The truth is that there is actually an inverse relationship between the number of hours an employee spends working and their productivity. One study from Stanford University found that, on average, workers are more productive when they work a 40-hour week than when they work 50% more or 60 hours per week.

What this means is that putting stricter regulations on the number of hours that workers can spend on the job may actually encourage employers to enact practices that improve their overall workforce productivity.

In other words, what seems like a burden could end up as a net positive.

There’s no sense in working employees past their peak performance, especially if the goal is to generate the most output. This approach isn’t just ineffective—it’s literally counter-productive in that it reduces the productivity of individual workers and the entire team.

Understandably, everyone is still not stoked about the new law.

Even if we assume there are productivity benefits to be gained from limiting employee work hours, that doesn’t address the other challenges introduced by the law.

For one, it will definitely create some additional red tape—both for workers and employers. One of the most common objections to the new rules is that it will introduce a new regulatory hurdle that can cost employers both time and money. Implementing, enforcing, and applying timekeeping policies does create some additional work, to be sure.

And, of course, workers aren’t always keen on the idea of tracking their time, either. Many workplaces turn this simple process into a dog and pony show of reciting verbatim every second of work performed the previous week.

The solution for both the pain of implementing a time tracking policy and worker’s frustrations with adhering to the process is actually maddeningly simple.

Of course, it’s not quite as simple as stating the obvious. There are some real considerations that go into both the design and implementation of time tracking to make it easier and more effective for all parties involved.

Our team at 7pace has poured our hearts and souls into crafting the most seamless, pain-free, and insight-rich time tracking process for software teams.

We’ve learned some keys to doing this:

Ultimately, the goal of every time tracking mechanism should be to provide as much insight and actionable data as possible with as little administrative burden as possible.

In order for timekeeping to be effective, it needs to be effortless. Or, as near to it as possible.

Not only does this mean that employees are more likely to adopt and embrace the process. But it also means that employers won’t suffer from having to carve out big chunks of time for their team to log their hours.

If we can agree on this goal and develop time tracking applications that meet the needs of the modern workforce, then having timekeeping as a standard part of every workplace won’t feel like such a regulatory burden. It’ll feel like something that’s both normal and valuable.

At the end of the day, the goal shouldn’t be to count hours for counting’s sake.

It’s about the protecting worker’s rights while also creating value for employers in the process.

If we can do that, then it’s a win all around.

By Tyler Hakes
Next postApproval & Performance Improvements Made in 4.28 Release
Prev postSet and Assign Approval Managers in Release 4.27
Free eBook