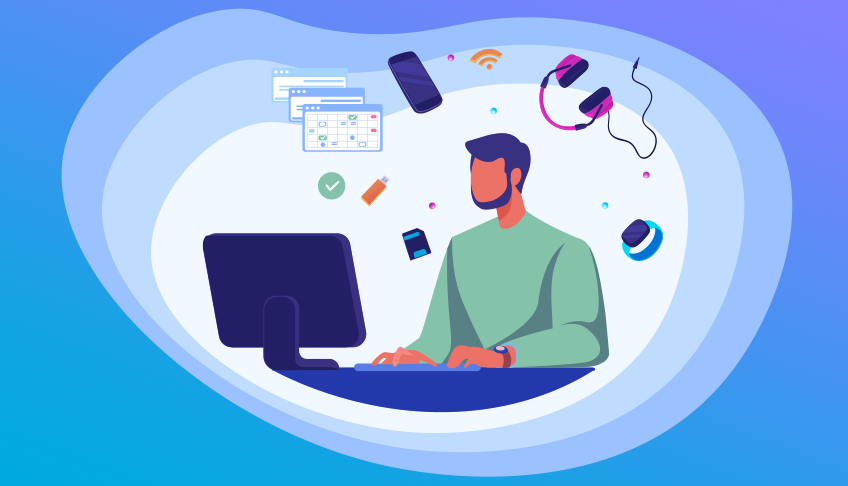 For many of us, technology is our lives.

Whether you want to lose weight, take better care of your plants, improve your memory, start a new workout routine, shop for groceries, or play a game with your friends, there’s an app (or many apps) that can help you. Even if your goal is to spend less time engaging with technology, there’s (unironically) an app for that, too.

Compare that to 30 years ago, when almost no one carried a cell phone, home computers were just becoming commonplace, and the most invasive part of technology was getting telemarketing calls at dinner time. The prominence of technology has changed our lives—for better or for worse—in almost every way imaginable.

But what many of us don’t consider is how that constant connectedness has changed our most basic behaviors. When considering the role of technology in our daily habits, a sort of chicken-and-egg question arises.

Here’s How Technology Changes Our Habits

Research shows that a major key to changing human habits is rewards.

That’s a big part of why apps are so successful in changing our behaviors—because they offer immediate rewards in the form of lights and sounds that give our brains a quick hit of dopamine, the chemical that causes happiness and satisfaction.

That’s what makes smartphones addictive at their most basic level. We tend to reach for our smartphones constantly (and often subconsciously) because our brains are craving the dopamine hit that will come if there’s a surprise notification—like a new text message or social media update—on the screen.

In this sense, almost all software is designed to drive habits. The problem is that habit-causing rewards lose their power the more often you experience them.

Knowing this, many developers have keyed into the habit-making power of rewards to create software specifically to change our behavior.

Take, for example, the popular exercise app “Zombies, Run!” The game turns exercise into an adventure, tracking users’ movements to create a sense that they’re running to escape from hoards of zombies, pick up supplies, make deliveries to survival compounds, and more.

In the game, runners can track their best times and progress. By succeeding at different challenges, they can unlock new levels and rewards. That’s what makes the game fun and what makes it so helpful to people who are trying to build exercise habits. Because rewards lose their power over time, the linear progression of the game and the possibility to unlock new levels creates new and better rewards the more you use it.

There are two main types of habits:

Technology has the best chance to cause the second types of behavioral change, because the technology is what drives your learning a new habit. Technology can offer simple rewards that help train you to do a new behavior. Over time, the reward loses its power, but once the technology is removed, that training means you still do the behavior.

In other words, you’ve formed a new habit.

On the other hand, technology isn’t as effective at causing behavioral changes to existing habits. That’s because in order to change a habit that’s already formed, there needs to be a reward for the new behavior that’s greater than the reward you already get for the old behavior. That’s not an easy thing for an app to do (more on that in a minute).

How Technology Can (and Can’t) Affect Our Daily Habits

Let’s take a look at a few different habits, and the role technology plays in creating and changing them. Keep the two types of behavioral changes in mind for both of these scenarios.

Changing how you manage your time is not easy. It’s an example of the first type of behavioral change: Changes to behaviors that were learned through experience.

Technology is less likely to be able to shape a habit like this one because the rewards for these types of behaviors tend to be intrinsic—for example, for managing your time well, the reward is a sense of productivity and accomplishment, something that’s pretty difficult for an app to offer you.

It’s also difficult for an app to offer rewards that are greater than those intrinsic rewards you’re already getting (plus other rewards, like the sense of comfort that comes with doing things in a familiar way).

In other words, the best way to change your habits with regard to how you manage your time may not be to introduce a new system or strategy. It’s to look at your existing habits in a new way in order to learn from your own experience.

That’s why, in this case, habits should drive the software versus software designed to try to drive a change in habit.

Most development teams, for instance, hate the idea of management introducing a new time tracking system to their workflow. In part, because the introduction of the new system will force them to change their existing habits without offering any substantive reward that would motivate such a change.

This is part of the motivation behind building 7pace as a way to allow software teams to shape their habits over time—based on data and experience—rather than try to force change by introducing a new system or process. By integrating the whole process of tracking and analyzing times into the existing tools and workflows, it becomes a source of feedback that can bend habits slowly, without the false pretense of re-wiring your work life with a badge or push notification.

But, this post isn’t about how great our product is. Let’s look at how this manifests itself in other arenas.

Let’s say you just visited your local farmer’s market and came home with more than just fresh produce—you adopted a living houseplant to help brighten up your apartment. The problem with houseplants, though, is that they require regular care to survive and thrive, and if you’re not in the habit of caring for a houseplant, you’re going to need to be.

So, technology to the rescue!

There are tons of ways tech can help you create the right habits you need to keep your new plant babies happy. It could be as low tech as setting smartphone alarms to remind you to water the plants or move them to sunnier windows throughout the day. Or you could download a plant care app, complete with an encyclopedia of knowledge about the exact needs of different plants, and push notifications to let you know exactly what to do and when.

In this case, the technology is creating new habits.

The rewards start off simply: Notifications on your phone screen when it’s time to do some plant care will give your brain that dopamine kick that encourages it to continue an activity.

Over time, as that reward loses its power, your motivation for continuing your new habit will likely become more intrinsic: You gain happiness from seeing your plant grow and bloom. At that point, once the habit has been created, you can remove the technology, but you’ll likely continue to care for your plant because your behavior has been successfully changed.

Why Does This Matter to Developers?

Developers have an interesting role in this whole discussion, because they exist on both sides of it.

For example, how much does software define the way developers do their jobs? What aspects of a dev’s workflow are just “done that way” because it’s the way the tools allow them to be done, even if the workflow could be better? And what’s the cost of doing work that’s driven by the tools that are available, rather than creating tools that allow us to do work the way we want to?

On the other hand, should developers be considering their roles in creating software that shapes habits in other people? What about the ethical implications of creating programs we know trigger addictive responses in their users?

When software is used for creating positive habits, like a better exercise routine or better plant care, it’s easy to overlook the potential negatives of habit-forming software. But anything habit-forming can be abused, and software is no exception to that.

As technology becomes more and more intertwined with our daily lives and our habits, these are the questions that developers should consider. From the ethics of software creation all the way to simpler questions, like how technology affects workflows, these issues are only going to become more complex as technology grows.