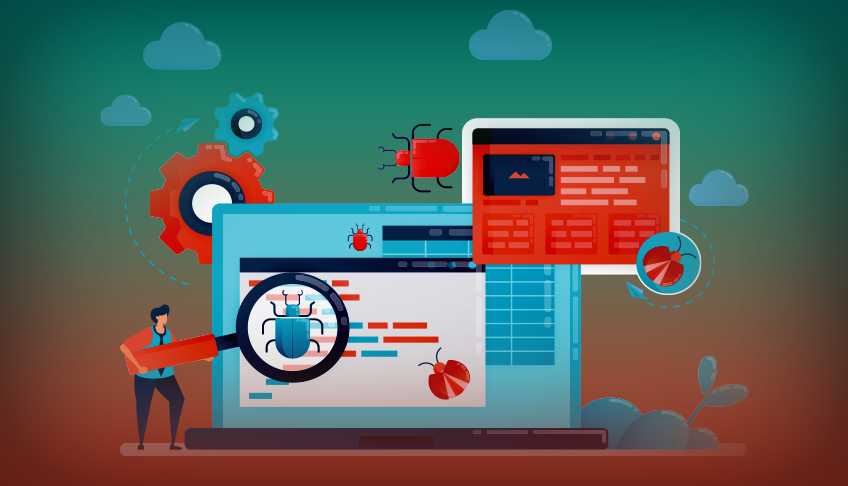 You know that feeling when you’re lying in bed, ready to fall asleep, and suddenly, you see a spider on the bedroom ceiling? You’re not going to be able to fall asleep until you’ve done something about that bug.

They may not be creepy or crawly, but software bugs are named after the perfect animal anyway, because they’re just as pesky as the insect kind — and just like the spider on your ceiling, software bugs have to be addressed before your program will work properly.

And just like insects are the most common type of animal on Earth, software bugs happen all the time. But why? What causes them, and how can engineers do a better job of squashing them before they cause problems?

There are tons of reasons bugs happen. Just like there are tons of reasons a person might make a mistake in any part of their life, developers make mistakes while coding, and then you have bugs. However, understanding some of the most common reasons bugs happen can help you try to avoid those scenarios more often. While it’s impossible to completely eliminate all mistakes in your team’s work, these are the top reasons bugs make their way into software projects, and what you can do to prevent them from happening on your team and your projects.

1. Code Is Written by Humans

You’ll never be able to do away with 100 percent of human error. But studies show that people who work longer hours are much more likely to make mistakes, so if your team is working sprints that include a ton of overtime, that may be contributing.

You may also get bugs because your engineers lack experience and practice. Combat this by looking for experienced engineers for your team, offering wages that will attract talented developers, and offering educational experiences that help your team continue to grow their skills.

Communication breakdowns can present on your team and in their code in multiple ways.

Bugs can be the result of incorrect communication about the project and its requirements. They can also come from a lack of communication, either about the project requirements, or between team members who are collaborating, leading to problems when they attempt to integrate their code. If the customer isn’t clear about what they want the project to accomplish, bugs can result because of guesswork on the engineers’ end. Making changes to the requirements during the coding process is also a great way to get bugs, as is adding features to existing code when the working developer or team isn’t familiar with that base code.

Beat bugs caused by miscommunication by getting clear guidelines from the client before beginning the project, making sure all engineers are aware of those guidelines, and by fostering an environment of open communication and collaboration between team members working together on a project.

A very common cause for bugs in your code is deadlines that your engineers can’t realistically meet. Whether it’s because they’re working long hours to try to hit the deadlines, or because they’re taking shortcuts to try to finish a project on time, unmanageable timelines are far more likely to result in buggy code.

Combat this by having experienced project managers setting deadlines, and by keeping open communication with your team. If they’re struggling to meet deadlines, or having to work long hours to do so, your timelines likely need to be adjusted. If you’re struggling to figure out how long it’ll take your team to do work, try experimenting with calculating your pace.

4. Third-Party Tools Have Their Own Bugs

Sometimes third-party tools can make the development process easier, or they’re even necessary for a project. Tools like Debugger, Compiler, plug-ins, external APIs, shared DLLs, class libraries, and more might be useful for getting a project done, but if they have bugs of their own, they may create bugs in your code.

This is tough to avoid, since you often don’t have control over the code and functionality of a tool designed by someone else. If it’s an open source tool, you may be able to tweak it, but that takes time and skill away from your own project. If you find that a third-party program or tool is consistently resulting in bugs in your own code, it may be that the best thing you can do is just start avoiding that program or tool.

Most engineering teams have a built-in defense against bugs: Testers. But testing processes aren’t foolproof either, and bugs manage to slip through. Here’s why your testing process might be failing, and how to address it.

In 1990, software engineer Boris Beizer coined the term “Pesticide Paradox” in his book, Software Testing Techniques. He was referring to the phenomenon that, the more you run particular tests on your software, the more immune it becomes to those tests. Even though it’s been nearly 30 years since Beizer introduced the idea, engineers still see the Pesticide Paradox in action today.

Never get complacent about your testing process. The way to beat the Pesticide Paradox is by changing up your test suite, reviewing it and making updates as often as possible to ensure it’s keeping up with product changes as they’re made.

6. There’s Not Enough Time for Testing

Just like engineers need good project management that gives them enough time to meet their deadlines working at a comfortable pace, enough time needs to be left for testers to thoroughly do their jobs before a project is shipped. Since testers work toward the end of the development process, it’s even more likely that missed deadlines before the code reaches the testing phase will put a time crunch on testers, requiring them to either work overtime or skip some tests.

If your deadline is fixed, this can be a tricky problem to overcome. You’ll have to analyze risks and make some tough calls about how you can decrease the scope of testing to meet your deadline while still trying to catch as many bugs as possible.

Having a good project manager on every project, setting realistic deadlines for all stages of the project, and ensuring that every member of the team is hitting those deadlines will help avoid this problem to begin with.

7. Bugs Are Found, But Not Fixed

Testers are responsible for testing the system and reporting on its quality, but it’s ultimately not their decision what to do about problems that are found. It’s not too uncommon that testers will discover and report bugs, but it’s ultimately determined that it would take too much time, money, or backtracking to fix them.

Testers should be encouraged to report bugs they discovered in as clear and timely a manner as possible; this helps leave enough time for developers to circle back and fix errors in the code. All stakeholders should receive comprehensive information from testers about the system’s functionality, performance, usability, and security, with open communication between stakeholders, testers, and developers as the best path forward is chosen for dealing with bugs.

8. Sometimes, Even the Most Obvious Bugs Get Missed

Just like developers are human and make mistakes, the same goes for testers. A human tester isn’t going to catch every single bug that comes their way, no matter how good they are at their job.

Not much, since it’s impossible to eliminate human error. Practice multitasking and attention to detail. Pay your testers and developers a living wage and give them plenty of time off to maintain a good work-life balance. Happy, satisfied, engaged workers do the best work.

It’s Impossible to Squash Every Bug

As long as software is coded and tested by humans, bugs will always exist. There’s no way to eradicate them completely, as annoying as they may be. But by knowing what causes them, you have a better chance of finding and squashing them.

By Christina Marfice
Next postSoftware Project Profitability: How Muddy Boots Uses 7pace to Keep Projects Profitable
Prev postMost Meetings Are Pointless (But They Don’t Have To Be)
Free eBook